Flame
Heronstar is a dark grey tabby tom-cat with sleek fur, multiple scars, white paws and a white tail-tip, and crisp amber coated eyes. He has a rather small frame, but he makes up for it with his strong, powerful muscles. He is the current leader of CaveClan, his parents being Corina and Shadow. Most of his past is revealed in his fan fiction, Heronstar's Dilemma. He was born as a Loner, but was eventually taken to live in CaveClan by his father.

As a kit, he was known to have a brutal childhood. He was always picked on for being a former Loner, and for always being "weak" in the skill of fighting. Although he was picked on, he stood tall and strong, and strove to be the current leader that he is today. Being raised by Loner's, who eventually joined CaveClan and took him there as well, he still has a bit of trouble finding his way around the Clan territories, and has a little bit of a hard time understanding right from wrong because of his past childhood.

His parents, along with other clanmates in CaveClan, taught him the ways of CaveClan, yet he still hasn't exactly adapted to their culture and style of living yet. He prefers water shrews, small fish, and insects rather than land anmals, but will eat anything regardless of what he prefers.

Heronstar's pelt is a dark collage of grey with a small tint of silver on his underbelly. A small, invisible scar rests on the very tip of his flank, and he surprisingly has no nicks in his ears yet. He has a few dark coal black spots scattered across the back of his pelt, and his legs and tail are covered with luminous darker grey stripes that blend in with his think fur quite nicely. His fur is very well groomed, but not as well as it should be. His tabby stripes are a thick build in his pelt, and match him perfectly. His exact pelt time is unknown, but he is thought to be a mix of a Bengal tabby and a mackerel tabby.

He has a small, almost (barely) visible scar on his left shoulder with beautiful amber eyes that shine in the sunlight. He is a noticeably rather handsome tom, and has almost all of the she-cats all over him. He has pitch black pupils with a strong frame, lean shoulders, and a very strong bone-like muscle structure that can strangely help him to jump off or onto thing to thing without falling off. Strangely, his toes have a small webbing, which help him to swim very well if ever needed.

His tail is long and thin, allowing him an acceptable amount of supreme balance. His paws are large and round, and his whiskers are a beautiful pure snowy white with long, thin edges. His face is somewhat round and triangular, being the usual normal shape of any other ordinary cat. His fur is noted to be somewhat glossy with a large, even head to top it all off. He has a mackerel tabby stripe along the back of his spine, it being the same color of his stripes and spots. His irises are a light shade of amber, yellow, and a very light green combined, followed by a dark glow of tan. 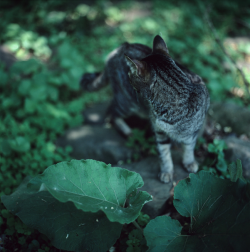 Please do not edit this gallery unless instructed to.

Retrieved from "https://warriors-of-the-wasteland-rp.fandom.com/wiki/Heronstar?oldid=760"
Community content is available under CC-BY-SA unless otherwise noted.